I’m excited to announce I am having a solo show at Crain Art Gallery! During the six-week run, I will be at the gallery four separate days to visit with you. Saturday, March 3 is my opening reception. I plan to have some video work running as well as the art that is hanging on the walls.

On three days in March and April, I will come to the gallery as Artist-In-Residence. I will be on the grounds during business hours to create a new piece during the day. Come by between 2 and 4 to see how I have progressed with each new artwork. I’d love to talk to you about my process.

Addendum:
The April 1 demonstration has a been canceled as the Library will be closed for Easter. 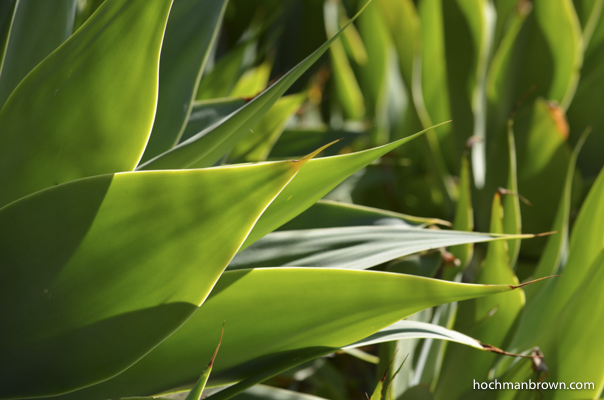 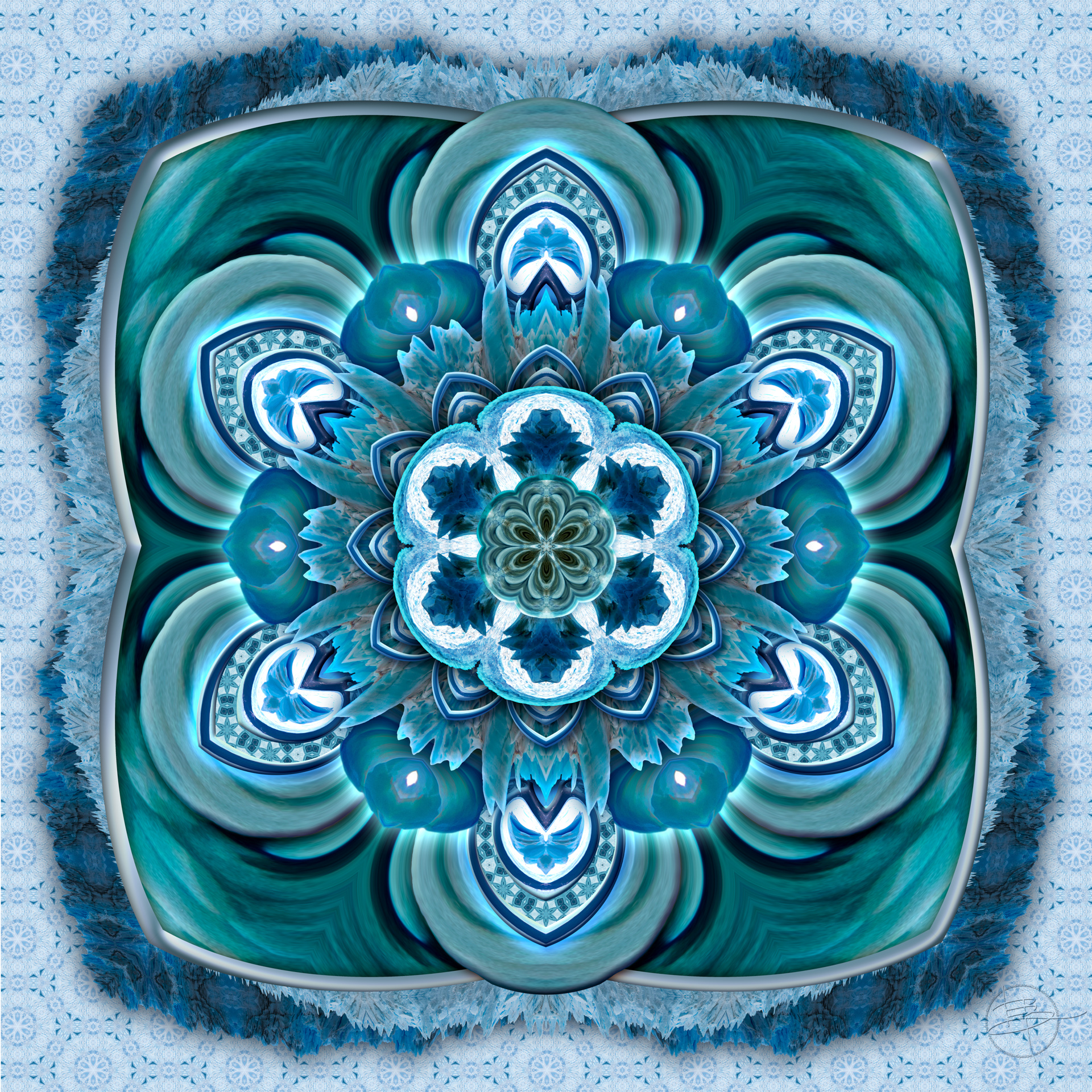 Over the past several months, I have been sharing animations of my work that take you through the process of constructing a piece as I build it up layer by layer. Today I am sharing a different aspect of the creative process. When is a piece done? It is easy to overwork in the quest for that moment when the artwork is finished. Working on the computer, I have the luxury (or is it a curse?) of being able to endlessly edit. I also have the ability to save stages of a piece. The animation I am presenting here goes through many stages in the creation of “Perito Moreno Glacier,” searching for that moment when it is done.

The Perito Moreno Glacier in southern Patagonia was one of the highlights of our trip to Argentina. My husband and I take the standard package deal for most of our travels. No jeeps or helicopters, we do the pedestrian version of the tour. At Perito Moreno, that means a multi-storied catwalk that comes very close to the face of the glacier. Your base of operations is a vast tourist center/cafeteria atop an overlook to the giant glacier. And you walk down a metal path that keeps the hoards from trampling the earth and still get up close to the face.

The view is from a high vantage point. The jagged structure of the glacier surface is startling in its severity. I knew I must take many pictures of the amazing blues and patterns to use in a kaleidoscope. As I began to work on the piece, I was continually stymied. My work has been mainly of organic material. The form of giant ice structures and watery blues seem unfamiliar, and monochromatic is problematic. And so I fiddle with many different iterations in search of the point when the piece is done. I believe that creating “Perito Moreno Glacier” took more time than any other work of mine. The animation shows “only” 14 of the 31 versions I recorded. I printed out drafts at an alarming rate. I gave it a rest for two weeks—twice. But in the end, it was beautiful; it was dramatic; it was done. 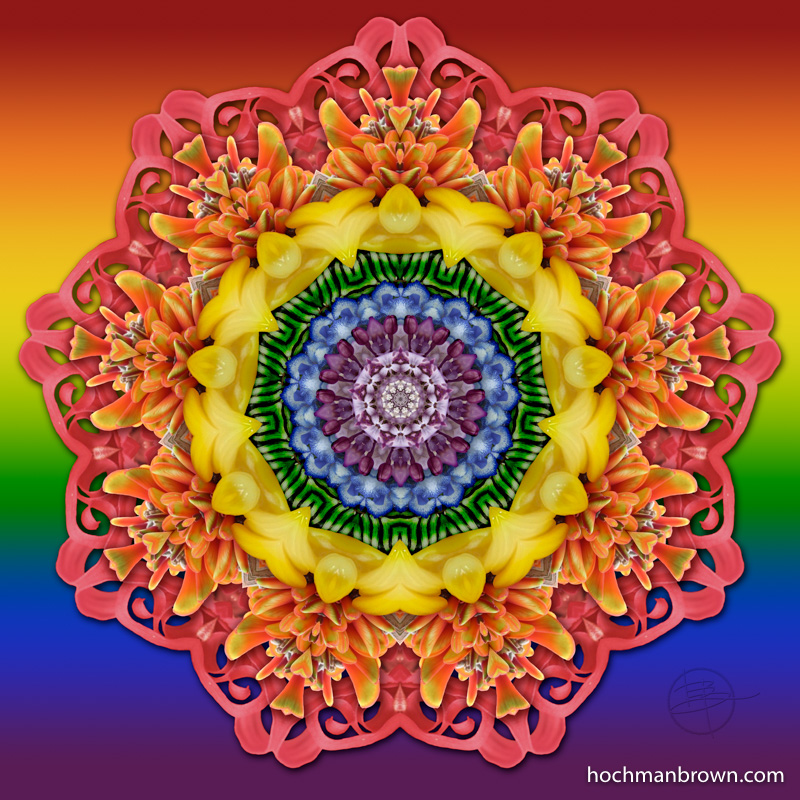 I have always loved making things. As a child, I sold watercolor greeting cards and beaded jewelry in my father’s place of business. I made my own clothes. I painted and crochet and embroidered and set bezels and on and on and on. While reviewing an old diary, I see that at one point, I had wanted to be a world famous fashion designer. I did have a small stint at making playful fabric hats (Bell Hats Over The Pacific) and other children’s dress-up items, but I moved on to working completely on my computer.

And in the digital realm, there is no actual product. Yes, I can and do print on paper and aluminum substrates that can be used to dress up walls. But my earlier passion was to make garments and personal adornments. For this, I have had to wait for the technology to print designs on fabric. And it is quite an interesting world now that artwork can be translated into fashion on demand! The first manufacturer I used gave me a good looking garment, but the fabric was thin and I was worried about having a Lululemon moment. Fortunately, I have found a company that produces a fine product that I am proud to present.

I decided to use my artwork “LoveWins” for my first foray into digital printing on fabric. The piece was made in support of marriage equality and I think using it for fashion is an expressive way to share the love. The leggings and beanies I started with are a fun and cool way to take my artwork off the walls and share the love with the world. You can find them and other designs I’ve been working on over on my Art of Where site here!

This summer I had the opportunity to do a finite series of 50 small artworks in 50 days. I set up parameters for the work, one aspect was that I incorporate a technique I haven’t used before in the kaleidoscope pieces.

For the entire series, I designed a custom paint brush that I created in the program Studio Artist (Synthetik Software) to create the backgrounds from each of my base images. Studio Artist is a graphics synthesizer that can apply individual brushstrokes based on a photograph or image. The program looks at the contours, luminance, color and texture and then can either auto-draw or be specifically directed by the user.

Watch the animation and you will see the brushstrokes being applied in Studio Artist. From the resulting “painting” of the sunflower base image, I reflected a portion around into the background. The additional layers are more similar to my kaleidoscopic work. They are reflected and distorted, but still keep the starter image intact. 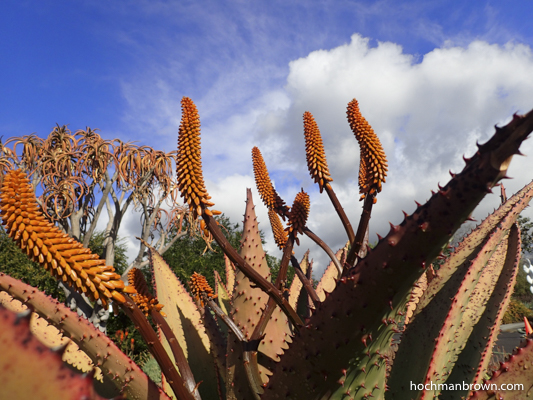 The Great Big Aloe Eye in the Sky is one of my more energetic pieces. The bright orange of the aloe bloom vibrates against the brisk blue sky.

The Great Big Aloe Eye In The Sky Animation from Karen Hochman Brown on Vimeo.

I took the photograph used to create this work at the Los Angeles County Arboretum. It had rained only hours before I arrived. I usually focus in on the flower for my pieces, but the combination of the orange spikes and clear blue sky were irresistible.

The Great Big Aloe Eye in the Sky is featured as the cover of my 2017 calendar. I only have a limited number and they will sell out quickly. 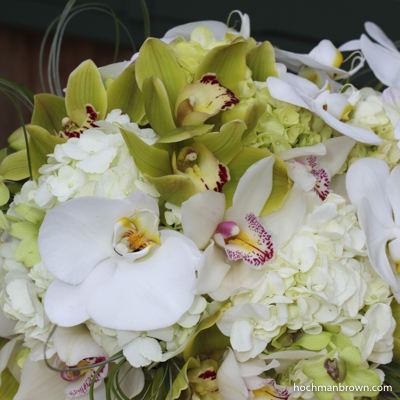 Loving Day commemorates the 1967 Supreme Court decision of Loving v. Virginia, the case that legalized interracial marriage. Both the case and the holiday take their name from Richard and Mildred Loving, a couple that grew up and fell in love in Virginia. Although Loving v. Virginia was decided in 1967, the most reluctant southern states took until the year 2000 to repeal their miscegenation laws. This became pertinent in my life when our family became inter-racial when my son and his wife were married on Loving Day. The basis for this artwork is my beautiful daughter-in-law’s wedding bouquet. 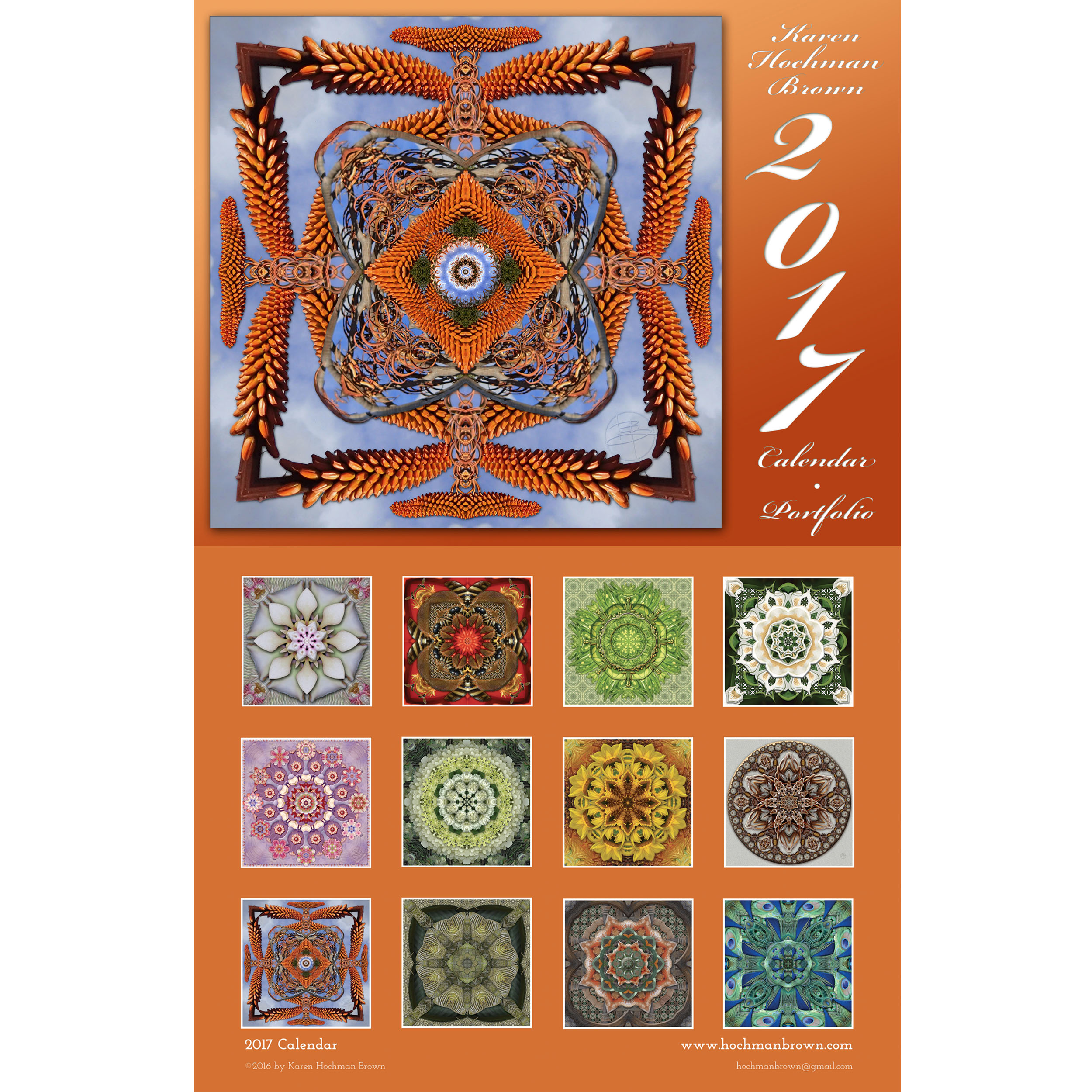 This is the sixth year of my self-published calendar/portfolio. Before I started specializing in my current form of art, I was a graphic designer. I guess I still am. The calendar gives me a chance to revisit my prior occupation. Putting the calendar together also gives me an opportunity to look back on the art I have created this year and relive what was going on with my life for each piece. The creations are very personal for me. Each photograph is a reminder of my travels or my mother’s garden or whatever was going on the day I took the picture. Each finished work is a memento that relays clues for what was going on in my life.

I included the four kaleidoscope pictures I created early in the year as Artist-In-Residence at the Los Angeles Arboretum. I wandered the grounds early in the morning to take photographs I would work with throughout the day, ending in the afternoon, and these pieces were done. This was an exciting challenge, creating a piece of art in a single day, in front of an audience. You can find these artworks in the calendar in February, April, November and December.

The other big project I had this year is represented in the months of January, June and July. These artworks were part of an installation at Sanchez Art Center in Pacifica, California. In this project, I created 50 small artworks in 50 days over the summer. I decided to use this as an opportunity to incorporate a technique I have been toying with for years, even before the kaleidoscopes. The basic form continues with the use of a single photograph that I have distorted and reflected. But for these small works, I made the backgrounds with a technique I developed that brushstrokes to paint the image based on texture, shape and luminescence of a photograph. 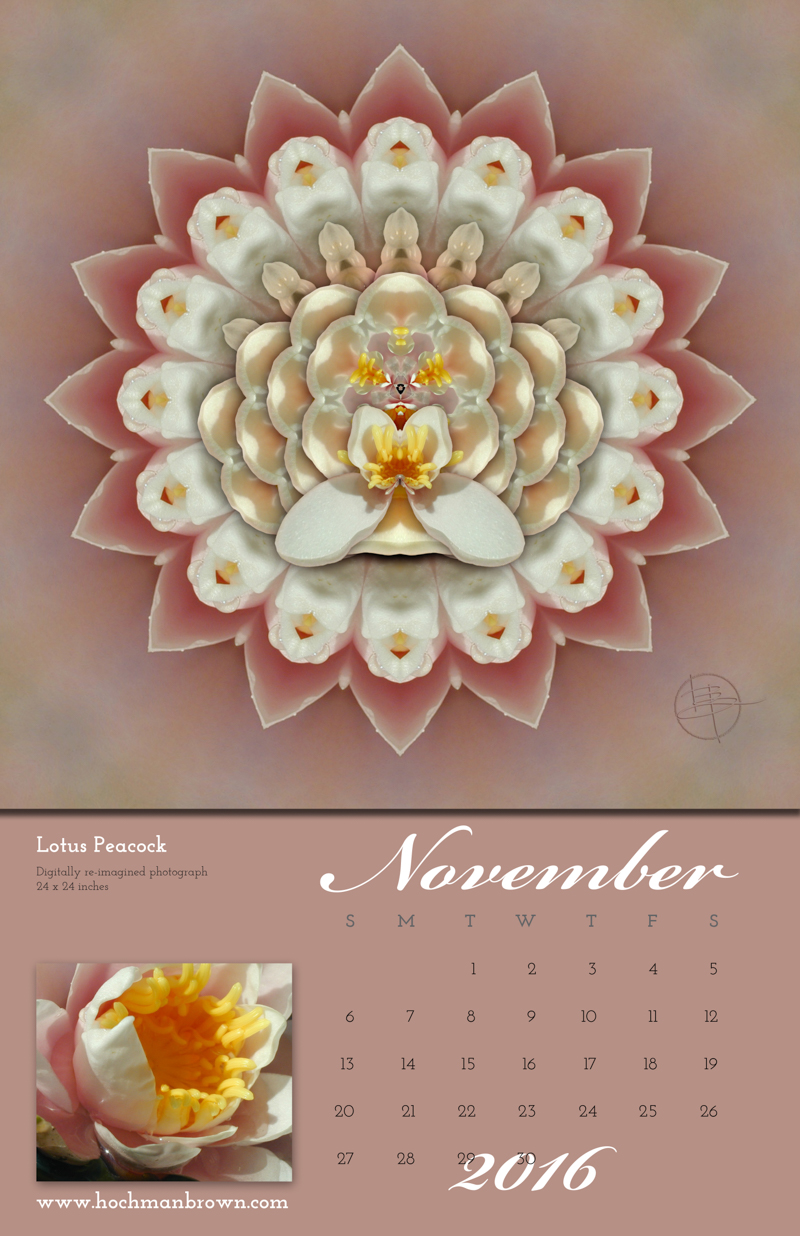