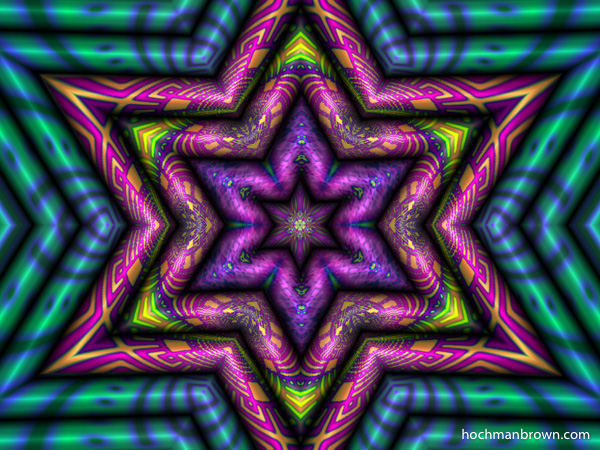 Many people ask me how I started this series of kaleidoscopic artworks. There is no short answer, but I’ll try to address it here. As to my background, you can read about it in my About Page. But briefly, I love kaleidoscopes, geometry and unusual plant forms. My background in graphic design got me well versed in image based software. For example, I was using Adobe Photoshop and Illustrator from their inception.

My curiosity led me to some pretty amazing programs that modify images by applying advanced mathematics to alter their original structure or to generate images from scratch. These programs go way beyond fractals. The ones I rely on most are Synthetik Studio Artist and U&I Software’s Artmatic Designer, with the latter being the one mainly used in my kaleidoscopes. I have another, completely different body of work that was created using Studio Artist, but I not going to talk about that at this time.

When I purchased Artmatic in 1999, I spent a lot of time working with fractals. The program has a randomize button that is useful when learning the software. There are hundreds of parameters (tiles) that can be strung together in different structures, or trees. There is no limit on the number of tiles that can be placed in the tree. Each tile has one to four sliders that can be adjusted. So using the random button and pre-designed trees are good jumping-off points.

It wasn’t until 2005 that I came across the small corner of the program that worked with center-based mirrors. I was working with Judaic themes at the time and I experimented a lot with six-pointed symmetry to relate to the Magen David star that has been adopted as a symbol of the faith. These artworks were created entirely inside the computer. I wasn’t yet using photographs for the source. In 2010, I had enough of these images that I decided to put together my first calendar. This means that in six years, I had created only 12 pieces like this, or enough for me to consider them a series.

It was in early 2011 that I began using my photographs to create the stars. I had already been using Photoshop to alter what Artmatic generated–cutting up several images, layering and weaving them together to make new artworks. As an example, the piece shown here, Magen David – Jewel Tones, is made from four variations of the same Artmatic tree, each with different surface decoration. When I discovered what using photographs did for my art, I ran forward with the idea and never looked back.

At the moment, my series of photographic based, kaleidoscopic artwork numbers in excess of eighty. Next, I’ll discuss the very first one.