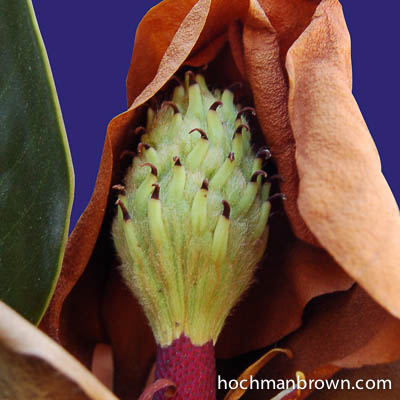 I was working on Judaic Art but had hit a roadblock. I wanted to have my designs custom printed on silk to make into prayer shawls (tallit). The results were beautiful, but the cost was too high to make them profitable. I was frustrated and needed another artistic outlet.

In January of 2011, I attended an inspirational seminar, Matrix Energetics. And while I did not become a practitioner like my brother, it did lead me to begin my series of photography-based kaleidoscopic artwork. When I got home, I created the first piece, Magnolia Pod-me Hum. The base image is a magnolia pod from a tree in my garden. It was placed there by my landscape designer as his gift to me and as a reminder of his business, Mother Magnolia.

I was looking though the various experimentations I had done with U&I Software’s Artmatic, a modular graphics synthesizer that I enjoyed fiddling with. I found an example I made from a piece of beach rock marked with holes. It was a simple reflection without any further manipulation. But it gave me the spark to play around with the idea of incorporating photographs into the six-pointed stars I had been creating in Artmatic and manipulating in Photoshop.

An idea was born. I used the Artmatic parameter tree (see blog post, Where did it all begin? Part 1) from Holey Beach Rock as my starter point. I made many variations on the theme with the photograph of my magnolia pod as the source. I took the resulting renders and imported them into Photoshop to be masked, shaded and layered. I decided the result needed a little something extra so I put in little versions of the magnolia pod and some dots. I can’t remember why I decided to try dots, but they seemed to work and added an extra something. The result was Magnolia Pod-me Hum–the first of what would become a series in excess of eighty pieces and still growing.

In the beginning, I set myself up with some rules, kind of like an assignment. I alway said that I work best under assignment. This time it didn’t come from the outside. My pieces would be made from a single photograph. They would be six-sided symmetry. They would have dots. I made eleven pieces like that until I created Rose Frills In Four which is titled such because I used a four-sided symmetry. Then with twelve pieces in the series, I made my second calendar.

Next time, I’ll talk about the process a bit.