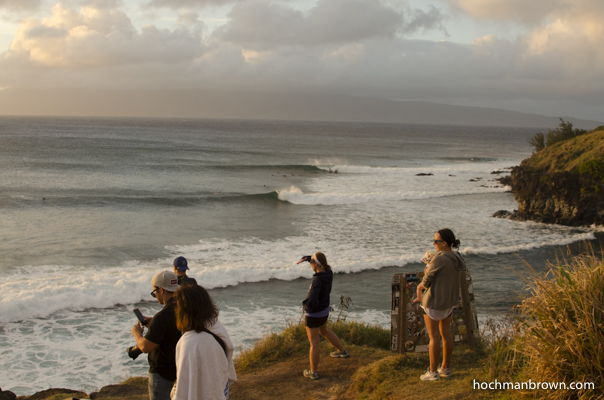 On our last day in Maui, we had a amazing lunch at Mama’s Fish House and then drove up the along the coast, across the island, and continued up the coast to our lodgings. But since this was our last day, I wanted to drive as far as the rental car company allowed. The roads on the back side of Haleakala are known to be treacherous.

I recall snorkeling there on our honeymoon, though we would stay out of the water this time. The day was almost ending. During the drive, we were entertained by the punctual late-afternoon rainbow, though the scenery was condos and golf courses and I didn’t stop to photograph this time.

The road opened out on a lovely vista of the bay at the edge of a cliff. Our company was a BBQ truck heading home and a drone-video operator taking his final up close surfer shots of the day. On the opposite rim of the bay, I could see cars of the surfers lining a dirt road. I really wanted to get closer but worried about damaging the car. This wasn’t the actual road, I would be OK, yes?

With a little bravery, I allowed myself onto the dirt road lined with the surfer’s cars. We still had to walk a ways to get to a spot with a view of the surfers. I’m not as nimble as I was when we honeymooned here, so it was with a lot more bravery that I climbed down the rocks and perched in a place to get even better shots of the water sport and the ongoing sunset.

The three images used here are from that afternoon. The ocean, the sky and the center wave are three separate photographs; each distorted using a graphics synthesizer program. I then take the various elements into Photoshop for compositing (putting the pieces together) and adjustments.